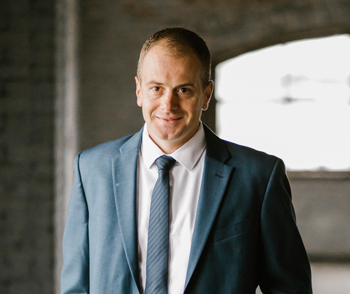 Luke Kujacznski came to Urban Alliance after successfully starting, building, running, and then selling a business in the construction industry. He originally started at Urban Alliance as a volunteer, and then became the second momentum director. When the prior executive director suffered a significant medical issue, he stepped up and led the organization through the crisis, first as interim director and then as the executive director. In the three subsequent years, he has led the organization from being supported by three part-time staff on a $450,000 annual budget, to having a $2,500,000 annual budget with 15 full-time staff in 2018.

Luke has a passion for justice and mercy. He loves second and third chances, because he has experienced that grace for himself in the past. He believes strongly in the transformative power of relationships and works to ensure all members of this community have access to pathways of hope. He says, “During difficult times in my life I learned the value of relationship in communicating one’s value, and these relationships gave me hope for the future. I want others to have hope, to see the good in the world and in the eyes of those closest to them. I consider it an honor to play a small part in creating hope for those without hope.”

Luke was recently selected by the Grand Rapids Business Journal as being a “40 under 40” business leader who is making a significant impact in West Michigan. Kujacznski has a B.A. in management and leadership development on top of extensive for-profit business experience. When not working, Luke enjoys spending time with his beautiful family, reading thought provoking books, and fishing.