When Dave first met Scottie, he didn’t really know what to expect. He was familiar with Momentum and its vision, and he was eager to join the ranks of Momentum ‘Coach,’ but now his preconceived notions were running headlong into reality. Scottie was working to escape the fires of life, and he’d brought another with him: his fiancé, Lacey. Only a few months before, Scottie and Lacey were living in the woods near a remote section of the railway near Jackson, Michigan. Homeless, hopeless and struggling with drug abuse, the couple knew they needed a change, and they decided to come to Kalamazoo to find it.

While helping Lacey enroll into a GED program, Scottie noticed a flyer for something called ‘Momentum’ that talked about job training and overcoming barriers. Scottie went to open enrollment, filled out an application, interviewed with staff and was admitted into the program. Looking back he admits he didn’t really know what he was getting himself into. ‘I didn’t realize they were going to have me look so deep inside myself.’ As part of the program, Scottie now found himself sitting across the table from his ‘Coach.’ A self-described private person, Scottie soon found himself confiding in Dave, sharing things he’d never shared before. He even remarked to Lacey, ‘I don’t even know why I was sharing that stuff. I never do that!’

All the while, Dave listened, without judgment, also growing in the process. His role was to encourage, and support and listen. Before long Dave, Scottie and Lacey were all meeting together because they quickly passed from the Coach/student relationship into a budding friendship. Everyone grew through the process. Scottie was hired by a wonderful local employer at a life sustaining wage. Lacey was growing in self-confidence each and every day. Dave was astounded by how much both Scottie and Lacey were overcoming. They were becoming different people, right before his eyes. And he was becoming a different person too. Less than a year removed from desperation, Scottie and Lacey secured stable housing in which to raise their soon-to-be-born child. Their story is a testimony that life transformation happens. Their story is an example of what happens when people are given another chance. Their story gives a glimpse into what can happen when we work together to demonstrate to people that they matter. As the passage goes, the harvest is plentiful but the laborers are few. Will you join us in our efforts? Will you believe in the power of belief? Will you take the risk to have your heart and mind forever changed? 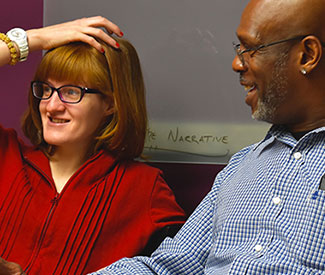